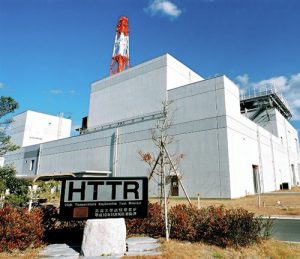 The seminar was organized commonly by Japan Atomic Energy Agency (JAEA) and National Centre for Nuclear Research (NCBJ) as a result of an earlier agreement on collaboration on the development of High Temperature Gas-cooled Reactor (HTGR) technology. The organizing team of the seminar was Dr. Yoshitomo Inaba and Dr. Hirofumi Ohashi from JAEA and prof. Mariusz Dąbrowski and Dr. Karol Kowal from NCBJ.

The seminar was under the patronage of the Japan Ministry of Education, Culture, Sports, Science and Technology (MEXT) and of the Polish Ministry of Climate and Environment (MCE). The welcoming speeches were given by Mr. S. Matsuura – the director of Atomic Energy Division, Research and Development Bureau of MEXT and Dr. J. Sobolewski – the adviser of the Ministry of Climate and Environment. The invited speech was given by Prof. Okamoto of the University of Tokyo.

The program contained both Polish and Japanese experts’ presentations. For the Polish participants it was the first opportunity to fully present the results of the GOSPOSTRATEG-HTR phase A project results and a brief oversight of the tasks of the phase B. This gave an important insight for Japanese colleagues on what could be the potential areas for further discussions. The issues of the legal, social, and economical aspects of the HTGR technology implementation in Poland together with the technicalities of the material and fuel research related to the problem have been reviewed. The most important task of the second phase – the design of the esearch high-temperature reactor “TeResa” to be constructed in Świerk and its possible licensing according to the Polish law have been first presented.

On the Japanese side there have been talks about the role of HTGR in decarbonization and its development. In particular, the issues of the reactor design on an example of the research & demonstration unit HTR50S, fuel burnup, and fuel cycle have been presented in details. Also, two overall lectures and very instructive lectures about the heat applications – and among them – on hydrogen production, have been given.

It is worth mentioning that the closing discussion was devoted to the three “hot topics” selected by the conveners, Dr. Ohashi and Dr. Kowal. These topics were the design of the research reactor in Świerk, the coupling of between the nuclear and chemical plants when for heat applications as well as the search for the new methods of radiopharmaceuticals production at HTGR.

The meeting has been a great success. More than 90 Polish participants registered for the seminar and about 20 Japanese researchers joined. At the peak attendance on the 22nd there were 91 participants and on the 23rd were 78 participants. The seminar had an open formula which means that everybody from the Polish side who was interested in HTGR technology could join. This could help in integration the national competence in the field. Online mode of the conference required fitting the time zones which meant that Polish participants took part in their mornings while Japanese in their afternoons/evenings.

The next seminar is expected to be held, depending on the pandemic situation, in person or online some time between June and October 2021. It is planned to be even a bigger event supported by some external fund.